What a Night, What a Fight!

What a Night, What a Fight!

Danny Green recently made the first successful defence of his IBO cruiserweight world title at Sydney’s Acer Arena. The champion Australian boxer defeated the legendary American superstar Roy Jones Jr. when the fight was stopped two minutes into the first round. Prior to the contest, John was there to perform the national anthem and sing some of his best known songs to the capacity 20,000 crowd and the worldwide television audience. It was to be a night to remember. 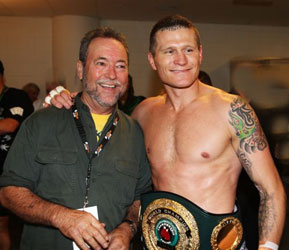