It’s been quite a while since the last report and we have lots of stories to tell and pictures to publish…
John and the crew finished off 2010 with a short tour of regional Queensland to some old favourites: the Moncrieff Theatre in Bundaberg, the beautiful Empire Theatre in Toowoomba and Twin Town Services Club in Tweed Heads. From there it was to Victoria for the Queenscliff Music Festival and then on to Perth for ‘Live at The Quarry’. So much countryside to see along the way, all so wonderfully different!

The Quarry was a new venue for John and he had three sellout shows there. They were quite magical . . . so totally different in atmosphere to his Opera House concerts only a month earlier but John was at his best yet again. Simon Holland reviewed one of the concerts in Perth’s Drum Magazine. Here’s what he had to say: JOHN WILLIAMSON
The Quarry Amphitheatre, City Beach
30/11/10
Master craftsman John Williamson lit up the summer night sky at Tuesday night’s instalment of Live at the Quarry. With a gumtree background, shooting stars passing overhead and the high limestone walls channelling the sound to the awe-struck crowd, Williamson delivered his distinct and iconic brand of love story. Accompanied by Col ‘Rowdy’ Watson, the sound that Williamson produced was simply astonishing. Armed with his deeply resonant voice, his trusty guitar and a mighty set of boots stamping out the time, Williamson inspired the audience with each word. Forty years of reflection were somehow distilled to just 120 minutes of heartfelt portraits of Australian life, each song revolving around the central muse, but weaving the beauty and textures in very different ways. When seen through his eyes, and experienced through his melody and lyrics, Williamson instils a sense of loyalty so deep and so pure that it’s almost impossible to breathe out and relax without an overwhelming sense of pride and belonging. Before delving into each song, Williamson purrs his often hilarious, often tear-inspiring anecdotes with a majesty that has come with forty years of polished performance. The selection of songs truly span a lifetime, from the hilarious epic Boogie With M’ Baby to Flower On The Water; the emotional tribute to his mate Steve Irwin. Crowd favourites Waltzing Matilda, True Blue and of course the classic Old Man Emu were played with vigour. John Williamson’s warm sense of humour, kindness and a passion for identifying the importance of deep Australian ancestry cements him as one of the last authentic poets in the tradition of Lawson and Paterson.
Simon Holland
The Drum, Perth

Before a short break for Christmas and only days after returning from Perth, John was back in Melbourne again as a guest on the ABC TV show ‘Spicks ‘N’ Specks’. We’ll let you know when it goes to air; sometime later this year.

The New Year kicked off for John and the crew with three shows at ’99 on York’ in Sydney. As well as locals, fans came to catch John’s show in this intimate setting from as far as USA, Scotland and Germany. (These shows will continue throughout 2011 once a month on a Thursday night on 21st April, 26th May, 23rd June, 21st July and 25th August). The venue is only a couple of minutes walk from the Queen Victoria Building and Myer so come into the city, do some shopping or have dinner and then see the show! Parking is available or it’s a short walk to either Town Hall or Wynyard station. 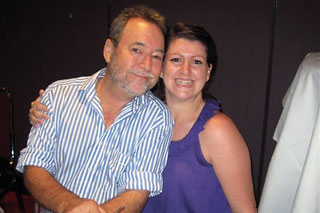 Lauren – the nurse John talks about from the ‘No Leave No Life’ TV show, which was part inspiration for his new song ‘Prairie Hotel, Parachilna’. 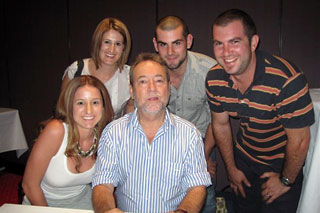 The Stein family from Stein Winery in Mudgee.

The day after the first of the ’99 on York’ concerts we set out off to Hobart for the ‘Sounds on the Ground’ festival where, once again, John was the headline act. It’s been a few years since John’s last visit to Hobart and the fans really went off! Not even the terrible storm the night before could dampen their enthusiasm! Hopefully there will be news of more touring in Tassie later this year . . . 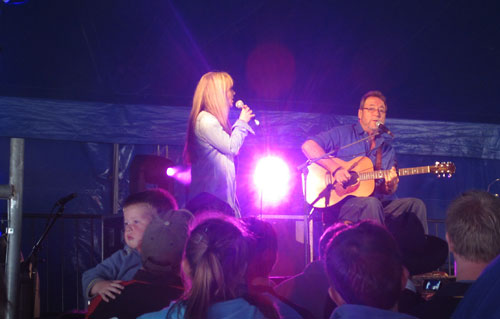 Wendy Matthews with John in Hobart