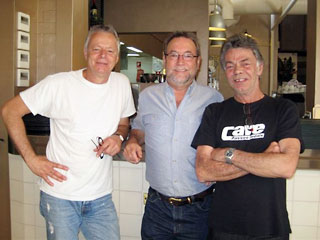 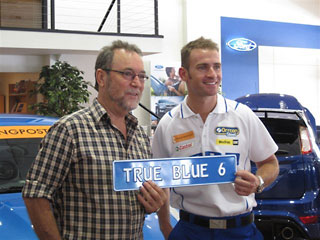 In January, John returned to Dural Country Club for his traditional ‘warm up to Tamworth’ concert and then on to Tamworth for the 2011 Country Music Festival. John headlined on the Maton Showcase concert (along with Col Watson, who also plays an Australian Maton guitar); caught up with old mates Phil and Tommy Emmanuel for a quick breakfast (the only time free!); accompanied Ford V8 Supercar driver Will Davison in a street parade and signing; and had the honour of presenting Jimmy Little with a Gold Guitar for his Lifetime Achievement at the Country Music Awards. 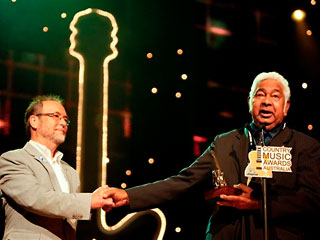 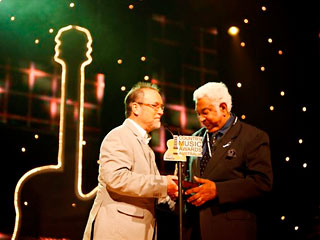 John’s own concert at the Tamworth Town Hall was before a sell-out audience. Many hoped to buy tickets at the door but were disappointed, unfortunately. The Tamworth community brought the Cook family, who had lost their home and all possessions in Ferndale in the Toowoomba area floods, to Tamworth for the latter part of the Country Music Festival. At his own concert, John invited them on stage and more than $700 was donated by John and his fans that night. This money was given directly to the family to help them in whatever way they wanted. 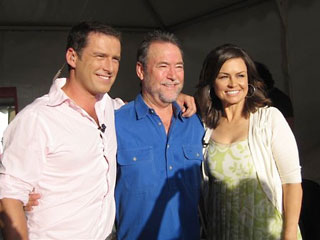 John with Karl Stefanovic and Lisa Wilkinson of the ‘Today’ show.

Another regular event for January was John’s performance at the Crocosseum at Australia Zoo on Australia Day. The day commenced at 4am, so that John could appear at Channel 9’s ‘Today’ broadcast from Suncorp Stadium, in recognition of the volunteers and others affected by the Brisbane flood, where John’s singing of ‘True Blue’ brought many tears from those in the audience.

From there it was a dash to the zoo for an early sound check before the gates opened. Always a great day; Bindi caught up with John and the crew after the show to say g’day (while young Bob searched for croc teeth that had fallen out in the Crocosseum pool during the croc show!) 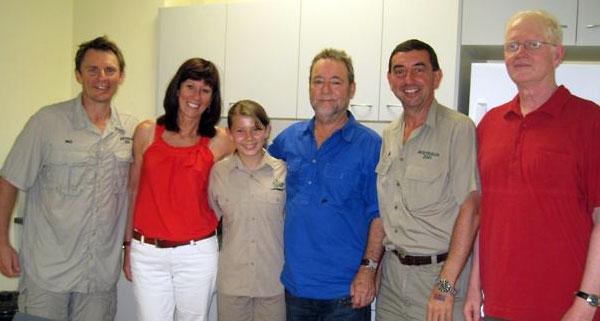 On 31st January, ‘Big Brother’ John Laws returned to radio with John as his special guest on his first day back in the Radio 2SM & Super Radio Network studio. Armed with a new ‘Lawsie jingle’ for his mate, it was performed live with all major TV stations present.

The first two weeks of February were spent in Tamworth. John was recording for the new album that will be released later this year. With all new songs, what an album it’s going to be! Recent audiences will have heard a few of them.

On the 20th February it was off to Victoria again for the ‘Cool Summer Festival’ at Mt Hotham. Little did we all know that the ‘Cool’ was going to live up to its name. Uncharacteristically wild weather saw winds of 135km an hour literally blow the sound equipment off the stage the day before and just about took the stage off the mountain. It had to be dismantled. So for the second day (John’s performance day) the festival performances were moved to a smaller but much safer tent. What a beautiful place it was though and a magnificent drive from Albury to get there combined with a wonderful stay in scenic Mt Hotham. It didn’t snow but it felt like it was going to! The weather conditions did nothing to dampen the crowd’s enthusiasm. 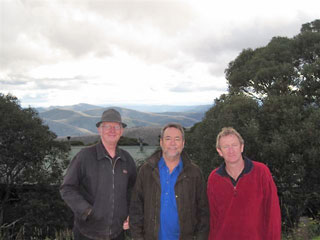 Col, John and Steve Newton at the top of Mt Hotham 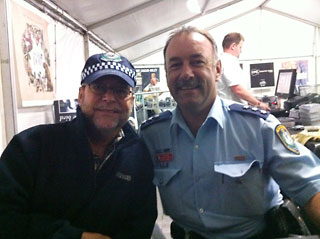 John keeping on the right side of the law with a fan at CMC Rocks the Hunter!

March has been a time of promotion for the new ‘John Williamson: In Symphony‘ CD and DVD, the Brisbane concert and more. John performed live on The Kerri-Anne Kennerley Show on Channel 9, plus a promotional visit to Brisbane. John was asked to fill in at ‘CMC Rocks the Hunter’ on Sunday 6th March to replace headliner Miranda Lambert from the US who was unable to make it at short notice. A lot of reorganising of schedules and John and Col were there to once again to entertain the 9000 strong audience and make them feel proud to be Australian.