Wow, What a Week It Was!

Wow, What a Week It Was! 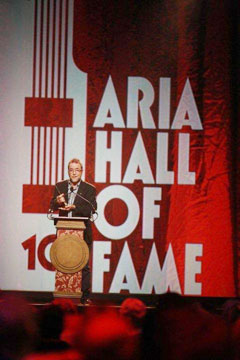 It’s been hard for all of us to keep up with the events of the past week, so from where John gets his energy is amazing. You may think that what’s on the TOUR DATES is all that’s happening, but rarely a day has gone by in his 40th year without an interview, a comment or something, not to mention the song writing.

On the night of Wednesday 27th October John was inducted into the ARIA Hall of Fame (Australian Recording Industry Association). Not only did Senator Bob Brown in fly from Canberra especially to induct John, but John received a standing ovation from the entire audience, not once, but twice! Surrounded by friends, long-serving staff, family, colleagues and peers, it was a night of celebration of a wonderful career and recognition of just how much John has carved a place in the hearts and spirit of Australians. Sara Storer paid tribute to John by singing ‘Mallee Boy’ and John, assisted by his mate and accomplished guitarist Col Watson performed both ‘Raining on the Rock’ and ‘True Blue’.

Two nights later, John emerged from the darkness (after a haunting introduction by a young didgeridoo player) to centre stage of the Sydney Opera House to an overture of his music by the Sydney Symphony Orchestra. Thunderous applause from a packed theatre brought him to the spotlight. For two shows the audience was captivated by the sounds of John’s voice, still with the campfire in front and his own guitar, but with the added interpretation of harps, cellos, violins and more, as his music was given a new dimension by the Sydney Symphony Orchestra under the direction of Guy Noble. From journeys around the country to personal experiences with his most requested songs as well as four new ones, John did it all. He made them laugh and brought tears to their eyes. People travelled great distances to be there, not only from the furthest states of Tasmania and WA but from Canada, the UK, New Zealand and even a huge effort from two fans in Finland, who arrived (despite an air mechanic’s strike) only hours before the Saturday matinee show started. 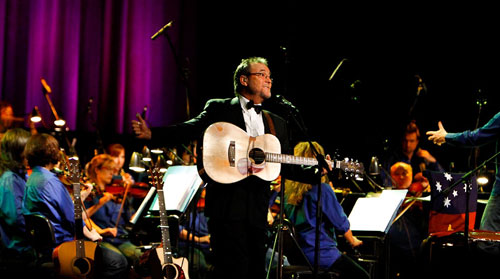 Johan at the Sydney Opera House 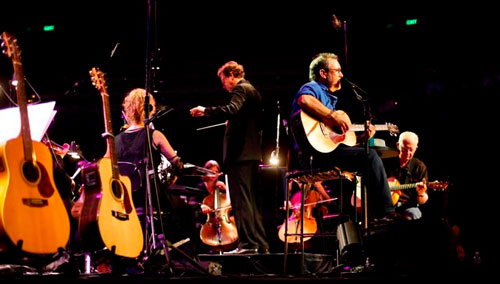 Johan at the Sydney Opera House

At the conclusion of the Friday night show, in front of the stunning backdrop of Sydney Harbour, Mark Poston, Chairman of EMI Australia, with a number of his staff, presented John with a magnificent plaque showing all thirty-five of his album covers from his forty year career. The plaque reads:
Presented to John Williamson in recognition of 40 Years True Blue. This plaque is awarded in tribute to four decades of great stories and songs . . . and making Australia a better place. With respect and best wishes from all your mates at EMI Australia.

After a brief escape to chill out and to also celebrate his birthday at a secret destination on one of Sydney’s most beautiful waterways, it was back into it, with Meg and John both attending the Variety Melbourne Cup luncheon. A highlight of this is also to pop in to see the ‘special kids’ who have a Melbourne Cup lunch of their own with entertainment and party food! (Pictured right: John catches up with the kids and Fairy Sparkle)

There’s little time to rest between now and the next tour in Queensland about nine days away (guess where John might just grab a few days beforehand!) This is closely followed by the Queenscliff Music Festival in Victoria and three shows at The Quarry in Perth. Yes, a third show has just been announced for John at The Quarry . . . WA here he comes!

The end of the year might be near but it’s not the end of John’s 40th year until June 2011, so more is still to come. Keep an eye on the website for some big announcements which might just involve John and a symphony orchestra in other capital cities! 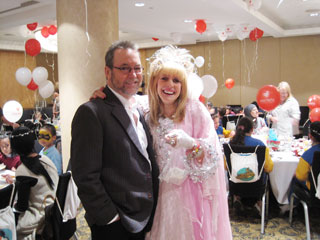 John catches up with the kids and Fairy Sparkle

And of course, for all of you who’ve been asking, the CD/DVD of the Sydney Opera House show should be available around the middle of January 2011. We’ve also had a number of requests to sell John’s True Blue flag stickers, so these are now available on the STORE page, along with all the new commemorative T-shirts, stubby holders, posters, glasses and CDs etc.

John loves to get your emails and letters but as he’s very busy, it can take a few weeks for them to be answered but he WILL get around to them!

Keep checking the TOUR DATES page as more dates continue to be added. Don’t miss seeing and hearing John as part of his sensational 40th year!