It’s hard to know where to start. From the minute we stepped off the plane at Jacksons Airport at Port Moresby on Monday 23rd April, Papua New Guinea welcomed and embraced us into their lifestyle, culture and history. For seven days we were looked after and shown the sights in a manner that could not have been more generous, more welcoming or respectful.

The purpose of John’s visit was to sing at the Kokoda 70th anniversary dinner to be held at the State Dining Room of the National Parliament and also at the conclusion of the Dawn Service at Bomana War Cemetery. To write about our week in full detail would take many pages, but even the highlights are many.

Before emerging to our stunning traditional welcome by the Huli Wigmen we were welcomed at a Press Conference by the Australian High Commissioner His Excellency Ian Kemish and the CEO of Air Niugini, Mr Wasantha Kumarasiri.

That evening we were welcomed again by the Australian High Commissioner and his gracious wife Roxanne Martens at an official ANZAC Day reception on the occasions of the visit by the Hon. Stephen Smith MP, Minister for Defence at the Australian High Commissioner’s Residence. There we met many interesting people including the Prime Minister of PNG Mr Peter O’Neill and three Kokoda Diggers.

After a sound check and rehearsal on our second day, we visited the magnificent National Orchid Gardens and Wildlife Sanctuary with Justin Tkatchenko, who established both. Justin’s knowledge of the orchids was an inspiration for John. Just how many might he be able to grow up at Springbrook?!

Our third day started early, like most Aussies, with the Dawn Service. Bomana War Cemetery is the resting place for more Australian soldiers than any other war cemetery in the world. This made it even more significant for the many Australians attending the service. For the four Aussie Diggers from the 39th Battalion it was a trip to relive horrendous experiences but more importantly to remember old mates and an emotional occasion for all present. John’s singing of ‘True Blue’ and ‘Waltzing Matilda’ at the conclusion of the service brought tears to young and old.

That afternoon we flew to Rabaul, accompanied by Glenn Armstrong and Justin Tkatchenko and arriving just before sunset. It was a chance to relax and enjoy an evening cocktail and fresh fish dinner in the balmy tropical setting of the Kokopo Beach Bungalow Resort.

Day Four was a full day of touring the Rabaul and Kokopo area. We experienced the claustrophobic Japanese war tunnels, Yamamoto’s bunker, some local markets and walking across the volcanic wasteland to the bubbling, boiling water of the active Tavurvur volcano where the heat from the ground, combined with the humidity of the atmosphere, was intense. We lunched at the Rabaul Hotel with owner, Susie. Her hotel is the only significant building to have survived the devastating 1994 volcanic eruption. Nearly all of the buildings were destroyed by the weight of the volcanic ash and this once vibrant town is little more than a ghost town. Having lived in Rabaul all her life Susie was a wealth of information and great company on our afternoon sightseeing.

On Friday morning our very early Air Niugini flight still managed to get away almost on time, even after the power at the airport went off twice while we were checking in! The staff showed great patience. There was time to check back in to the stunning Airways Hotel in Moresby again for the rest of our stay before being collected by Charlie Lynn. Charlie is a Member of the Legislative Council in the NSW Parliament but has also trekked the Kokoda Trail some sixty-one times as a Trek leader of ‘Adventure Kokoda’! His passion for PNG and his belief in assisting the villagers along the trail was inspiring. Much to our delight, Jim Stillman, one of the few remaining Diggers from the 39th Battalion, which lost so many young lives on the trail, also joined us for the afternoon. Charlie drove us to Sogeri Lodge for lunch, then on to McDonald’s Corner, and the legendary Owers Corner, some 50km from Port Moresby, which marks the end of the trail. It was a great privilege to hear Jim’s stories, and at ninety years of age, not once did he remain in the four-wheel drive, but negotiated the uneven ground, aided by his walker, to see all the places we stopped at that afternoon.

The grand finale of our visit was certainly the Kokoda 70th Anniversary Dinner on Saturday 28th April. John performed two sets of about an hour each, surrounded by the stunning PNG orchids which filled the room, showcasing the beauty of PNG flora. The evening was a great tribute to the soldiers and especially in acknowledging the legendary contribution of the Fuzzy Wuzzy Angels who played such a vital role in assisting the Australian troops. The whole evening will be etched in our minds forever.

The following day it was time to say our farewells. We felt we were leaving friends and that Papua New Guinea had found a place in our hearts. We will definitely return.

For our entire visit we were most enthusiastically and generously accompanied by Glenn Armstrong, Business Development Manager for Air Niugini and Justin Tkatchenko, a well-known businessman and TV personality, amongst other things. To all those who helped us and gave of their time and friendship, we will treasure the memories and their friendship. Thank you for sharing your country with us. John and Meg are welcomed by the Huli Wigmen 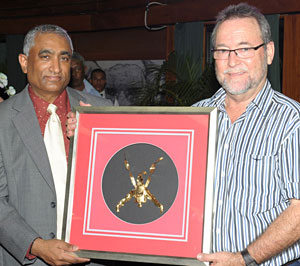 John with diggers from the 39th Australian Infantry Battalion John was honoured to be invited to join the family of Private Frank Archibald after the dawn service where this Aboriginal soldier’s spirit was ceremoniously called home. John sang ‘A Thousand Feet’ by the soldier’s gravesite. At dinner in Rabaul serenaded by the ‘local’ band, one of whom had been our guide for the day. John borrowed a guitar to join them for a song or two, much to their delight. The only problem was everything they did was in the key of D and always in the same rhythm! John with Charlie Lynn and Jim Stillman at Owers Corner. 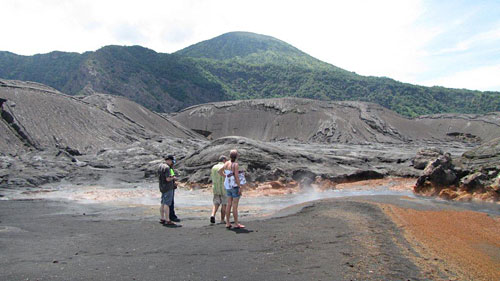 John and Col at the 70th Anniversary dinner John and Meg with Glenn Armstrong and Justin Tkatchenko