Back on the road again …

Over the coming months, The Big Red Tour will have us travelling to several states and many Australian towns and cities. We visited country Victoria at the end of March/early April and were pleased to see so many familiar faces once again at the concerts in Shepparton, Ballarat, Hamilton and Geelong. John was delighted to meet his old woodwork teacher from Quambatook and reminisce on such good school day memories after all these years.

We flew to Darwin for a few days break over Easter to attend the wedding of Sara Storer and Dave O’Hare. What a great place for catching your own seafood. But it was one lucky guitar playing finger that survived a nasty bite from this big mud crab as John pulled it from the trap in the Top End. After extracting the finger from the grip of these sizeable nippers (with the help of some pliers), the mud crab ended up on the plate for dinner! John’s finger has recovered but he was very lucky he didn’t end up with a more serious outcome! All thanks to swift action and a good First Aid kit on the boat. Next time we might just buy our meal! 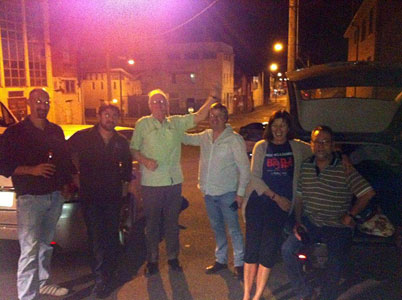 The Crew relaxing after the concert at Ballarat 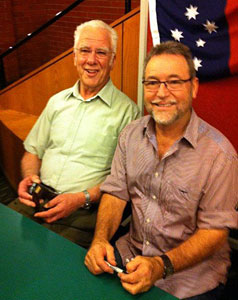 John with his old woodwork teacher from Quambatook