What a busy month May has been! It started with a few shows around Sydney before heading to the west on 8th May for a two week tour starting in Broome, way up north in WA and then down to Port Hedland, Karratha and Carnarvon. With a couple of days off after the first four, we travelled way down south to Albany then worked our way back up the coast to Bunbury, Mandurah and Geraldton. It was also a tour of weather contrasts, going from balmy tropical temperatures for the top end and then winter temperatures for the southern part of the tour, particularly Albany. The audiences in the top half were most appreciative of the effort involved in getting there and many travelled long distances to see John perform live. Songs from ‘The Big Red’ certainly made an impression while the older favourites seem to just get more and more popular.

The logistics of this tour were quite a problem. The long distances between towns in the top end, coupled with the shortage of accommodation in the mining towns, especially Port Hedland and Karratha, were a huge challenge. A special thanks to all those who helped us out with both, particularly Broome Aviation, Shine Aviation, Fortescue Metals (for our very interesting stay in the mining compound at Port Hedland) and Velocity Village and Cherratta Lodge at Karratha. Without their generous help we probably wouldn’t have been able to make the tour happen. And what a shame it would have been to miss the wonderful Pilbara . . . one of John’s favourite places in Australia!

To Mike Chandler, our tour and sound manager, thanks for the massive effort in organising all the travel and accommodation arrangements. We’d be lost without you!

With only a couple of days off after travelling back from WA, it was then out to Central West NSW. Memories of the beautiful sunshine and scents of frangipani in Broome gave way to the cold weather but a warm reception from audiences in Bathurst, Orange, Dubbo and Condoblin. John’s manager, David, had a taste of being ‘on the road’ for this tour! June is traditionally a bit of time out for John, so he’ll be heading for the hills for a couple of weeks. But not for long . . . don’t forget the Ocean View Estate Winery, not far from Brisbane, on Sunday 24th June and then back to the tropics for Cairns and Darwin on 29th and 30th June. 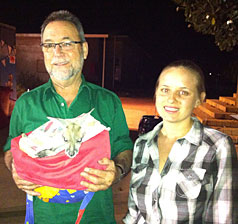 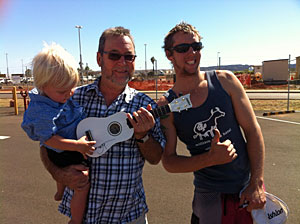 …and another young ‘Mallee’ with his dad, who has taken john’s advice about little fingers starting on a ukulele. John and Col with our enthusiastic production crew, who had the long drives taking all the equipment 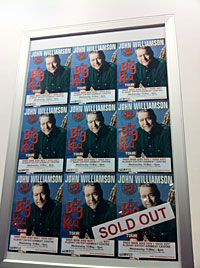