2012 kicked off with the release of The Big Red album on the Australia Day weekend. What a way to start the year! The album launch was in Tamworth on 27th January, followed that same night with John’s regular concert at Tamworth Town Hall. With the venue packed to overflowing, fans loved the new songs, which were worked into the show with the old favourites. John just keeps getting better . . . that’s the verdict of people that night.

The touring for the year began as usual with the Dural, NSW show where fans were lucky to be the first to buy the new album. Shortly after, Sydneysiders and visitors to the city were in for a treat on Australia Day as John performed to a relaxed crowd in the middle of the city in Hyde Park as part of the Sydney Festival.

From Tamworth it was back to Sydney and the whirlwind promotional visits to radio stations and media in Sydney, followed by a trip to Melbourne and then to the Gold Coast, the Sunshine Coast and Brisbane. John and Col performed the first single to be released from the album ‘Hang My Hat in Queensland’ many times over those days! This link will take you to one of those interviews and performances with Denis Walter on 3AW: Click here to go to the 3AW page…

The last few weeks have seen John and the crew touring Victoria to sold out venues in Sale, Wonthaggi, Frankston and Warragul. Following that it was the long trip to Perth for a balmy night at the Swan Yacht Club, right on the water at Fremantle. Again it was sold out and the audience went off. The only down side of the trip was the three hour flight delay on the way back, which meant that John missed the Waratahs vs Reds Super Rugby game.

Last weekend it was south east Queensland’s turn, starting at Redland, then Logan, Toowoomba and finishing in Caloundra, just as the rains started to tumble down. It was great to see the ever increasing number of families who brought along their young children and are already fans of John . . . often as young as five and six. John loves to meet them after the show. On this tour we also met fans who’d travelled all the way from Germany to catch one of John’s shows.

In the past few months John has also been introduced to a couple of baby Cydis. We’ll be talking about that more in the coming weeks, but it you have a ‘Cydi’, we’d love you to email us with a photo and your story.

John has a couple of weeks off from touring now before heading back to Victoria again. Tune in to ABC Radio 702 on Friday 23rd March to hear John as a special guest Richard Glover’s entertaining and very popular ‘Thank God It’s Friday’ program.

The special edition of The Big Red is only available now through John’s own website and on tour. The special edition comes with six collector cards of John’s own artwork, which relate to songs on the album. There were only 7,500 of the special edition CD and card pack printed, which sold out in the first few days, but Warner Music printed more, just for us. This edition will not be available retail stores again. Until next time. One of John’s newest fans at Toowoomba. He’s also a John. 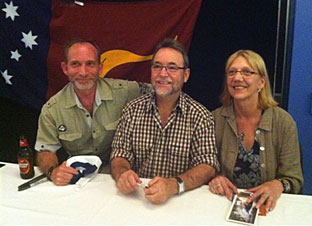 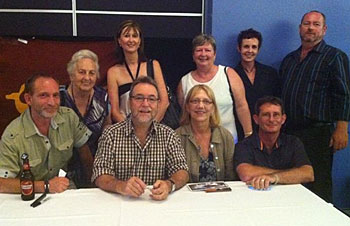 …and brought all the family as well. Collector cards of John’s own artwork