Rather than calling this an ‘on the road’ update it’s more like an ‘in the air’ update. John often says that travelling around this great country of ours is a privilege and that each tour he sees as a ‘working holiday’. As John and Meg were off to Japan early the next morning following the wonderful Grafton Saraton Theatre concert in September, there was no chance to hang around and enjoy the scenery on that occasion! Japan was the first non-working holiday in more than four years and the result of a Variety charity auction nearly twelve months ago. So, in the past five weeks, there’s been a lot of flying. First to Japan and back and then, a week later in early October, John and Meg headed to Washington DC and New York for a performance for the Australian Embassy and the Department of Defence in DC. What a night that was. A glamorous black tie dinner with about 40% Aussies and 60% Americans from the highest places! John not only made a lot of Aussies very homesick that night (and proud) but wooed the Americans with explanations of his lyrics and his stunning solo performance of his most Australian songs, taking them on a visual journey from one corner of the continent to the other.

With Aussies from the function, they headed for an Irish pub downtown to see the Wallabies play the Springboks. You can imagine what that was like . . . an Irish pub in Washington DC packed with South Africans, Aussies and anyone else who was passionate about the Rugby World Cup and who just had to see the game. To top off a great night, the Wallabies won. Back to the hotel at 3am and with a 5am pickup for the flight to New York, plus coping with a bit of jetlag . . . a busy schedule!
On Saturday 29th October, John, Meg and Col flew to Noumea to join the ‘Country Cruise’ for the last four nights. Performing two shows plus the final night ‘finale’, they’ll cruise to the Isle of Pines and then back to Sydney. Sounds like it’s going to be a bit like ‘Tamworth on Water’! 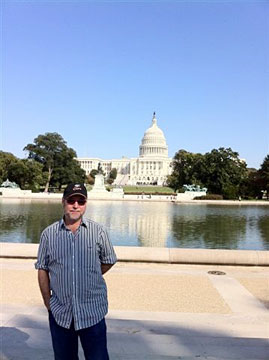