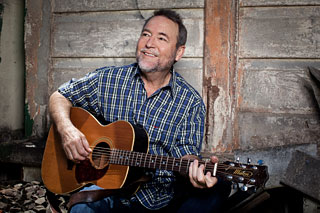 Warner Music Australia is pleased to announce that iconic Australian music legend, John Williamson, has signed with the label, a deal which will see Warner Music release Williamson’s latest album ‘The Big Red‘ on 27th January 2012.

WMA’s Managing Director Tony Harlow is very pleased to announce the signing – “John Williamson is a great person, a great artist and a great Australian. And he has a great new record, chock full of new stories and beautifully sung. The team behind him are full of ideas and not ready to rest on his (already considerable) laurels. What more could you ask for in renewing an old friendship, and bringing a legendary artist to a new home busting to work with him”.

With iconic Australian songs such as ‘True Blue’, ‘Cootamundra Wattle’, ‘Salisbury Street, ‘Galleries of Pink Galah’s’, ‘Raining On The Rock’ and ‘Rip Rip Woodchip’ to his name, Williamson the prolific singer song writer is one of Australia’s greatest musicians and is considered a legend within the industry.

Speaking of his new partnership with Warner Music Australia, Williamson said, “The Big Red is my first all original release in almost four years and I’m pleased that songs from the new album have pushed out other material from my show. For instance ‘Prairie Hotel Parachilna’ is the kind of song I know Aussies want to hear.

It’s great to join with Warner Music who share the same passion for the material and I’m looking forward to what we can achieve together”.

Look out! ‘The Big Red‘ is on its way. Williamson’s 48th album will be released by WMA on 27th January to coincide with his performance at this year’s Tamworth Country Music Festival.