It’s been quite a few years since John performed at Grafton but, the brilliant conversion of its wonderful old theatre to make it suitable for live shows, made this possible in September. It was fantastic to see so many enthusiastic fans turn out to not only support John but also this new local facility. Forster and Port Macquarie were a great success with the new songs from the upcoming album getting rave reviews from those hearing them for the first time.

This past week has been much about the NRL. Some months ago John was approached by the Men of League Foundation. The foundation’s charter is ‘to assist those from all levels of the Rugby League family who, for some reason, have fallen on hard times’. John met with Bob Bennett (brother of legendary coach Wayne Bennett) and Graeme Hughes to discuss the possibility of him writing an ‘anthem’ for them. Who better to do this than John? He wrote the anthem, they loved it and with the generous support of Sony Music and their studio and staff, the song was recorded with a ‘choir’ of former great League players including Greg Alexander, Frank Puletua, Bill Harrigan, Wayne Pearce, Phil Sigsworth, John Raper, Noel Kelly, Benny Elias, Neil Pringle, Eric Grothe Snr and Velu Nuumaalii.
You can click on this link to view the recording of the song. http://www.youtube.com/watch?v=-LfZ6XdQl00

At the Men of League dinner on Tuesday 27th September, the ‘Men of League’ song was launched and featured in the news on several TV channels. It seems to have attracted almost as much media attention as the grand final itself! John and Col performed it again on the Channel 9’s The Footy Show on Thursday night and also at the Grand Final on Sunday afternoon. ‘Men of League’ was made available for download only for a limited seven (7) day period from 9am Grand Final day, Sunday 2nd October.

In the coming week, John heads to Washington DC at the special request of the Australian Ambassador to the United States, Kim Beazley, to perform at a major diplomatic function. More about that on his return. Our new office is nearly sorted so, in the lead up to Christmas, keep an eye out for some special bundling of merchandise that might make great Christmas gifts! 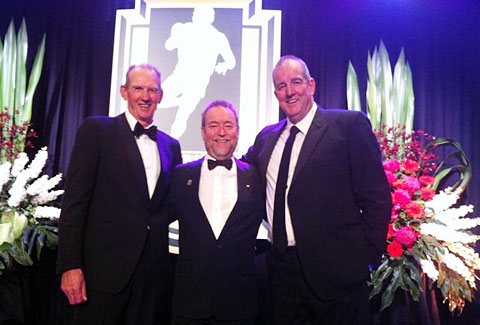 John with Wayne and Bob Bennett at the Men of League Dinner. 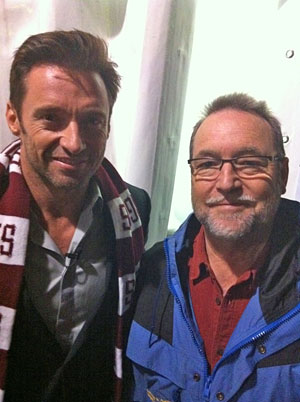 John and Hugh Jackman caught up backstage for a chat and a photo before appearing on Channel 9’s The Footy Show.