The concert with Orchestra Victoria was another huge success. It was interesting to have so many of the orchestra players come up to John at the end and say what a great night they’d had. In fact, one of them thanked John for the opportunity saying that he’d been with Orchestra Victoria for twenty five years and had never had so much fun! So if you’re thinking of going along to Hobart to see John perform with the Tassie Symphony, time’s running out to book. Don’t be disappointed and miss out.

July will also be the last of the ‘99 on York‘ shows for a while too. Not because John doesn’t want to do more . . . he does. He absolutely loves the intimate atmosphere and often throws in songs that he hasn’t performed for a long time . . . quite out of the blue. And it doesn’t phase Col at all. John also has Dave Ellis on stage with his big double bass. Dave has played on some of John’s biggest studio albums including ‘Mallee Boy’. We’re fighting to get the venue to give us more dates, but July 21st could be the last for a while, so don’t miss it.

June is traditionally a bit of time out for John so he headed for the hills to Springbrook to chop wood for the fire and build more of his stone walls. Channel 7 were there for a whole day filming for a special program about John that we’ll tell you about in time for when it goes to air. Time in the mountains always goes far too quickly for John. He also caught a couple of big footy games in Brisbane while he was in Queensland. Don’t forget to vote on the Twinings website for John’s tea, if you haven’t already done so. It will be Variety that’s the winner and the special needs kids, if he can get the most votes. Click on this link and it will take you straight there: www.twiningsaustralianblend.com.au

John has just finished a session in the recording studio in Tamworth, completing the new album which will be released in January 2012. He says it’s his best one in a long time and can’t wait to see it out! He also had a concert while he was there for ‘Hat’s Off’ time.

This weekend John and the crew head to WA for the concert with the Australian Army Band Perth and the following weekend are off to Uluru for a big corporate performance right at ‘The Rock’ itself! Maybe it will rain while we’re there. There’s never a dull moment. John with members of Orchestra Victoria 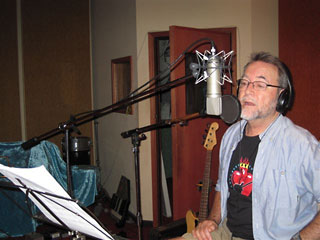 John in the studio