The only gig between now and the end of this month is the fabulous Gympie Music Muster. John will be on stage just before the sun goes down on Sunday 28th August, so that the families can stay around and enjoy his performance.

John and Meg were terribly disappointed to have to pull out of the 2011 NSW Variety Bash at short notice due to unforeseen circumstances. The Holden ute was all ready to go and John had spent the weeks leading up to the Bash doing endless interviews to promote the event. They’re certainly there in spirit and are getting plenty of updates from Bashers along the way who know how disappointed they are. They’re definitely planning on being there in 2012.

The past few weeks have seen the crew travel to Perth for the concert with the Australian Army Band, to the centre of Australia for a corporate gig at Uluru, to Canberra for a sensational show there and are now just back from Hobart and the concert with the Tasmanian Symphony Orchestra. Fans travelled from as far as Melbourne and New Zealand to catch John in Hobart. Col and John with conductor George Ellis after the Tasmanian Symphony Orchestra concert. 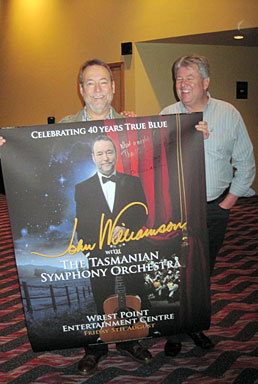 John with the orchestra shows’ promoter Marius Els at Hobart.