With a few short days at Springbrook to recharge the batteries, Col Watson flew up to join John. They spent the time rehearsing before heading to Brisbane for the concert with the Queensland Symphony Orchestra. This time under the leadership of maestro George Ellis, the audience was just as inspired and entertained as they had been at the Sydney Opera House at the end of last year. Once again they were taken on journeys and shared emotions from laughter to tears. 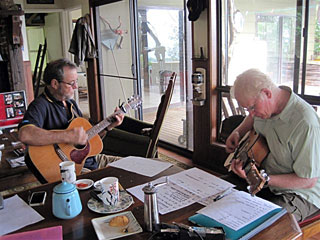 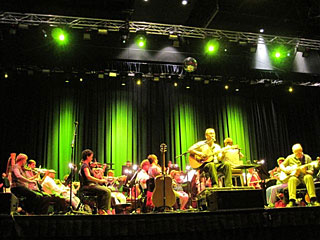 There was no time to bask in the success of the Brisbane night as early the next day John and the crew hit the road again heading for Toowoomba. Not only was Prince William an honoured guest at the Spirit of the Country Concert but John closed the outdoor show as the ‘special surprise guest’. Incredibly, the concert was attended by more than 20,000 from Toowoomba and the flood ravaged Lockyer Valley. All artists gave of their time at no cost, so there was also no charge to the audience. Despite the rain the locals were not to be deterred, creating a 5km traffic jam before the concert, as people determinedly made their way to the showground. 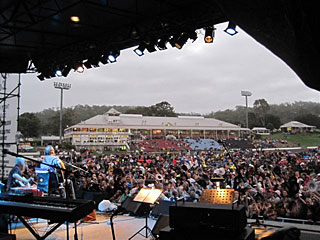 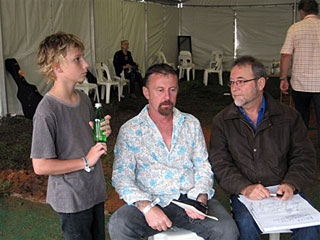 John spent heartfelt time before the show chatting with Blake Rice (young hero of the Toowoomba flood) and his dad John Tyson.

From there we were Sydney bound for two sell-out concerts at The Cube at Campbelltown, including a live broadcast from the club with Ben Fordham on drive time Radio 2GB. Ben as always, was excited to have John on his show, being quite a fan. A great night was had by all on both nights. 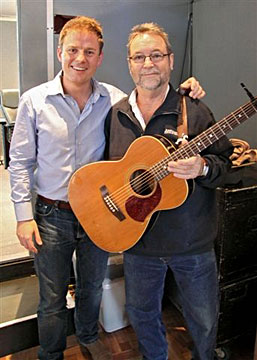 John with Ben Fordham at the live outside broadcast from The Cube at Cambelltown before John’s two concerts there. 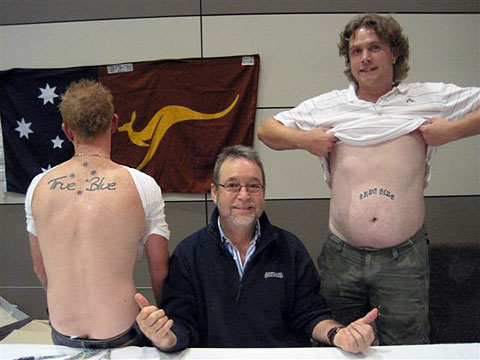 True Blue fans at The Cube!

With only a day to recover, John, Col and sound engineer Mike Chandler then headed west to Perth for a Radio 6PR radio promotion where ten lucky winners were treated to a lunch with some songs in an intimate venue.
Back to Sydney again (what a lot of travelling!) with a couple of days off before John took off again for Tamworth. What’s John been doing in Tamworth? Mixing the songs for the new album to be released next year. Most of the recording was done in February this year but that’s only part of the job. Tamworth is starting to feel like a third home. So that takes us up to date . . . for now.

Don’t forget the 99 on York shows in Sydney start up again this month. So if you’re one of those sensible people who DON’T want to be on the roads this Easter, take advantage of the opportunity to come into the city and see John at this great, intimate venue. It’s a lot of fun and John has a bit of a surprise up his sleeve for these shows. The other dates (all Thursdays) are 26th May, 23rd June, 21st July & 25th August.

99 on York shows in Sydney

Straight after this, John and the crew are off to Alice Springs to board the Ghan to do some special things for Anzac Day including a concert in the magnificent setting of Katherine Gorge for those on the train. More on that in the next report from the road!