We promised to share the Ooraminna experience with you, so here is the full report of a truly wondrous night. 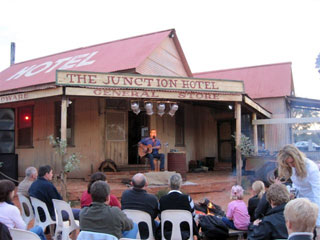 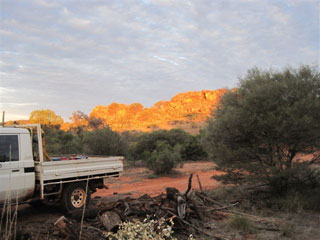 On Sunday 5th September, sixty people had the night of their lives at Ooraminna homestead, on Deep Well station, half an hour south of Alice Springs. Over the years, John has developed a close friendship with Jan and Bill Hayes, the sixth generation owners of the cattle station.

About a year ago John decided he wanted to do something to celebrate his 40 years, and he wanted it to be in the heart of the country, which has inspired so much of his music. On Saturday night, 4th September, there was an open air concert at the Memo Club in Alice and Sunday night was the intimate special night. For this, people came from near and far, from Germany, USA, Canada, WA, SA, VIC, NSW, TAS, QLD and a couple from Alice.

Boarding the coach in Alice Springs, the group made the half hour trip on the wide red dirt road out to Ooraminna. As they emerged from the coach, they were greeted by John personally and welcomed with a drink. As the sun set on the ancient mountains behind, the group moved their chairs around the campfire and John started his first set of songs. 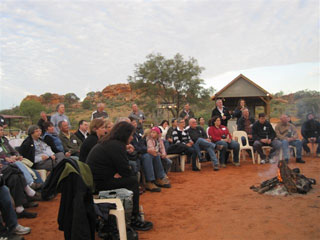 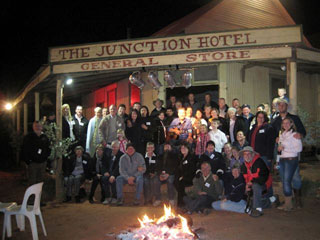 Then it was time for dinner . . . lamb shanks, damper and vegies. A break for more songs from John was followed by apple crumble for dessert. By this time everyone had well and truly had a chance to meet and talk with John in a casual and magic setting as John mingled and got to know the group. But it didn’t stop there. The billy was boiling, the campfire was beckoning and there were more songs to sing under the outback, starry sky. The sounds of John’s many songs echoed across the beautiful country. The most frequent comment from people on the night was that they ‘wouldn’t have been anywhere else in the world’. We’ve since learnt that there was a proposal of marriage . . . Congratulations Kylie and Andee! 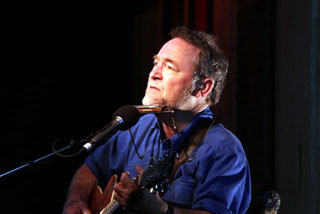 Not only did the group have the time of their life but John enjoyed it so much he’s thinking of MAYBE doing it again sometime in the future . . . somewhere! Our thanks go to Jan and Bill Hayes and their wonderful staff for looking after us so well.