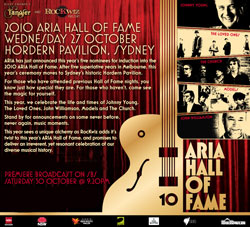 It has been announced that John will be inducted into the ARIA Hall of Fame on October 27th this year. How special is that! From all of us at Fair dinkum Road Co we congratulate you, Johnno. No-one deserves it more.
On his impending induction, John said, “I am delighted about the news that I will be inducted into the ARIA Hall of Fame in 2010. In my 40th year in the industry, I feel like I’m probably one of the oldest to be inducted into the ARIA Hall of Fame. It’s probably because I was a one-hit screamer for thirteen years after Old Man Emu! Forty years of songs hasn’t been without its disappointments – the first ten I had no idea where I was going, but the last thirty have been truly rewarding. And I’m proud that my songs have struck a chord with everyday Aussies. They were written for them. I love this beautiful big country; it inspires me. And there will always be battlers out there forging a living against the odds. I will continue to write about them for as long as I can.”
The ARIA HALL OF FAME AWARDS will be staged in Sydney at the Hordern Pavilion on Wednesday, 27 October, 2010. It will also for the first time be broadcast on commercial television on SBS.