The Big Red – The Album

The Big Red – The Album 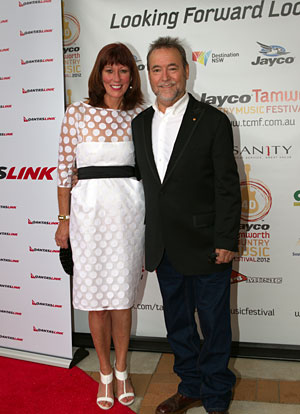 John and Meg at the 2012 Golden Guitar Awards, walking the red carpet. Meg was dressed by Carla Zampatti and got the big thumbs up on her style. (www.carlazampatti.com.au)
Warner Music Australia is pleased to announce that iconic Australian music legend, John Williamson’s The Big Red, a twelve track studio album, was released nationally on Friday 27th January 2012.

The recording comprises material penned by the modern day poet over the past three years and contains quintessential ‘Willo’ sounds, with images that capture the country in song, inspirational songs of mateship and romantic ballads that touch the heart.

Released through his recent signing with Warner Music Australia, the album is reflective of the multi-award winning artist’s passion for his craft. It reminds all as to why he has remained a success for more than forty years, with tracks on the CD sure to become favourites for all Australians domestically or a treasured keepsake for those overseas.

The first single ‘Hang My Hat In Queensland’ is pure poetry; an autobiographical account of Williamson’s life. Everything from his birth in the Mallee district of Victoria through to moving to Sydney from his family’s farm in Moree after winning television’s ‘New Faces’ with his song ‘Old Man Emu’. The lyrics encapsulate his story in music.

Never one to shy away from his truth, Williamson follows it up with ‘Movie Star’, a song paying tribute to those who have succeeded but feel they have never reached what they consider the top. ‘Rescue Me’ simply touches the heart and is a piece of perfection that will resonate and bring tears to the eyes of many.

Add to this ‘Mates Around The Fire’ which will appeal to all who identify with Williamson’s recurring theme of mateship mixed with the outback. ‘The Weight Of A Man’, is a song written by Russell Crowe that Williamson has made his own, whilst showcasing the musicality of the Hollywood superstar.

There are twelve tracks on this release, not one that doesn’t stand up to the quality that the iconic songwriter is known for. Each one is crafted perfectly and sure to become chants, wedding first dance tracks or songs to belt out amongst friends and family around the fire, lounge room or penthouse apartment. That’s the thing about Williamson; he doesn’t fit one genre or style. He is for all Australians and The Big Red backs this up with his unique ability to paint the country and Australian style and character onto a canvas of song like no other.

Inducted into the ARIA Hall of Fame in 2010 and the recipient of more awards than he cares to mention, there is no question that John Williamson is the real deal. He stands by what he represents and is unashamedly proud of the country he loves. For this artist, whilst the awards are a nice recognition, there is no doubt it is the reaction from his audience that is most important.

‘At last The Big Red is out of the box. I think those who know my music will think ‘Yes! This is what we’ve been waiting for from Willo.’ For those who don’t know; clear the mind of American influences. This is purely Australian. I hope it makes you as proud as I am of the place,’ said John Williamson.

John and Meg at the 2012 Golden Guitar Awards, walking the red carpet. Meg was dressed by Carla Zampatti and got the big thumbs up on her style.
(www.carlazampatti.com.au)

John performed PRAIRIE HOTEL PARACHILA at the awards from his new album THE BIG RED and everyone is still raving about his performance!