The second weekend of the tour was a particularly full one. After the first night in Taree, it was an early start to get to Port Macquarie by 10am to visit the Koala Hospital. It was a chance for John to re-visit the hospital and see the extensions to the John Williamson Wing, catch up with Max and Jean Starr, the founders of the hospital, plus the many volunteers who work there. They were very proud to show off the new Koala Rescue Ambulance, which came out of fundraiser, ‘The Gumboot Ball’ which John attended as special guest, two years ago. Media from the local newspaper and TV were there to interview John as well as an interview for a National Geographic story. We were lucky that the visit coincided with the birthday of their oldest koala, aptly named ‘Birthday Girl’. She was given a feast of the very best selection of swamp mahogany and peppermint gum, while John had a chance for some great up-close-and personal photos.

John was the special guest at ‘Birthday Girl’s’ birthday party

Up close with ‘Birthday Girl’ 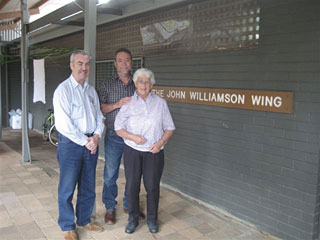