On Thursday 21st January 2010 John Williamson was honoured in Tamworth by the Governor-General Her Excellency Ms Quentin Bryce AC for his 40 years in the entertainment industry. In the midst of the annual country music festival, the Governor General presented John with a special glass-etched award for his milestone year congratulating him on his achievement.

The function, held in the country music capital, saw John Williamson first presented with a Gold Record for his sales of 2008 album release ‘Hillbilly Road’ from EMI Chief Executive Officer, Mark Poston. Concluding this, the Governor General proceeded to continue the recognition through the presentation of the etched plaque in front of family, friends, colleagues and media.

During his introduction, Mark Poston said “Everyone at EMI is proud to be associated with John Williamson. EMI is a music company built on an incredible lineage – from The Beatles to The Beach Boys to Coldplay and Slim Dusty – and all that’s in between. John Williamson stands alongside those iconic artists as one of Australia’s finest. Congratulations from us all John for another Gold record with ‘Hillbilly Road’ and looking forward to a big year ahead for your 40th anniversary year in the business”.

The Governor General, who admits she is a ‘fan’ of Williamson, was given the honour of the 40th Year Tribute presentation. In her speech she recognised his importance to the country, his contribution in vocalising so descriptively the land and his passion for the country.

Williamson, who was unaware of the Governor General’s intended presence at the function, was grateful and humbled by the double presentation. “From the Mallee to Croppa Creek and all around our country, I have been inspired by the land, characters and stories before me. ‘Hillbilly Road’ was a personal album, one that flowed so easily from me and to have my fans enjoy it as much as I did is such a reward. Here now, 40 Years in the industry and to be recognised so publicly is an honour. I am grateful to all who have supported, worked with or stood beside me, thank you,” said John Williamson after the presentation.

On Saturday 23rd January, John Williamson attended and was honoured with a special tribute performance at the 38th Country Music Awards of Australia (Golden Guitars) in Tamworth. 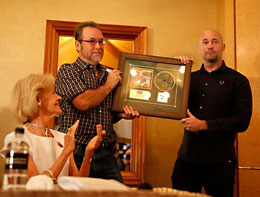 John with his Gold disc The Governor General, admits she is a ‘fan’ of Williamson John and Meg with the Govenor-General