That Was The Week That Was

That Was The Week That Was

What a week it was for John at the Tamworth Country Music Festival! Nothing could surpass the surprise presentation by Her Excellency Ms Quentin Bryce AC, Governor-General of the Commonwealth of Australia and her moving speech in recognition of John’s forty years in the industry, but it didn’t stop there. John performed his second show at Tamworth to a sell-out audience and standing ovation, with many fans who turned up at the last minute disappointed in being unable to get tickets.

That was followed by the CMAA Awards night where a special tribute was paid to John for his significant contribution to the industry again. Narrated by ‘big brother’ John Laws, forty years of career highlights filled the stage screens. But more than this, the tribute recognised John’s love of Australia and the many causes he has been passionate about and the impact he has made on so many Australians through his songs. Musical tributes were also performed by some of his peers. Melinda Schneider sang ‘Cootamundra Wattle’, Troy Cassar-Daley sang ‘Raining on the Rock’, Shane Nicholson performed ‘Songs for My Guitar’ and The Songbirds finished the tribute with ‘Old Man Emu’ bringing John onto the stage for the final verse. 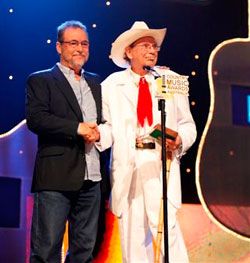 After fifty-eight years in the business, this was Chad’s first Gold Guitar

For John it was almost as much of an honour to present his old mate, Chad Morgan, with a Gold Guitar for his lifetime contribution to the country music industry in Australia. After fifty-eight years in the business, this was Chad’s first Gold Guitar (pictured left).

Then it was off to Australia Zoo for Australia Day. John has performed in the Crocosseum on Australia Day every year since Steve opened it. Afterwards John and Meg were given a whirlwind tour of the zoo to visit the new Wildlife Warriors Animal Hospital and some of the new areas under development. They had to a chance to get up-close and personal with some of the residents! 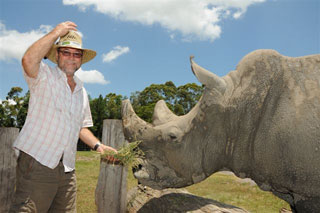 John and Meg with a rhinoceros 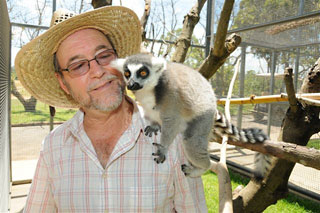 One of Johns furry fans 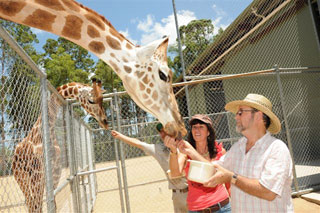 John and Meg with a giraffe 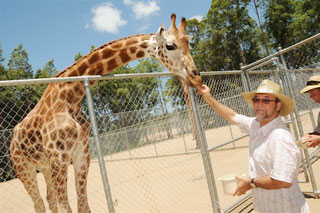 John and Meg with a giraffe

John will be heading to WA for the Perth Muster in a couple of weeks followed by a short tour in regional Victoria. Bendigo has been sold out for several weeks now and the others are not far behind. So don’t be disappointed and leave it too late to get your tickets if you’re in the area of Shepparton, Warrnambool and Horsham. John has some wonderful new songs as well as the favourites that just have to be sung.

* All zoo photos are included courtesy of Australia Zoo and remain their copyright.