One of the great benefits of having a website is that we receive constant feedback from the many visitors to these pages. Earlier this week, a journalism student sent us these questions. John’s answers give an insight of how much ANZAC Day means to him.

How did it feel to be performing on such a commemorative day such as ANZAC Day?
Firstly it’s always an honour to sing in any ANZAC Day ceremony. While I am comfortable singing my old song ‘True Blue’, it’s never easy at these occasions to keep the emotions under control.

Did you feel you needed to live up to a certain expectation?
I guess I always know that ‘True Blue’ is the right song for the job. So as long as I know I have my concentration in gear, I know I will live up to expectations.

How was performing against such a beautiful landscape (Currumbin’s Elephant Rock)?
I think performing on the beach was obviously appropriate to the ANZAC Gallipoli story. Also the sunrise over the Pacific Ocean has a special significance considering the Second World War.

Do you think the service and performance at Elephant Rock served to strengthen the awareness of ANZAC Day amongst the community?
I think Currumbin was well chosen also for the spectacular clear sunrise over the ocean, which naturally attracts bigger crowds, which of course promotes the awareness of ANZAC Day. ANZAC Day to me has become more of an ‘Australia Day’ than Australia Day. The character of the ANZACs at Gallipoli for the first time in history defined the Aussie character.

John Williamson’s recording and sound engineer, Steve Newton, made a short documentary of some of the Currumbin Beach ANZAC Day activities and John’s sound check prior to his appearance on the Seven Network’s Sunrise program that morning. Click on the arrow to play…Over recent months John & Warren have travelled to many towns in New South Wales and Victoria. It has been a joy to greet many longtime fans as well as meet a whole lot of new ones. We have some pictures to share. Please click on the photos to view an enlargement… 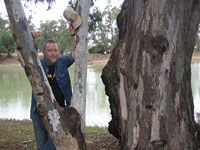 John by the banks of the Murray River near Mildura. 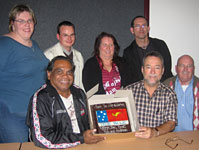 Fans who gave John and Warren a ‘True Blue’ cake they’d made after the show at Warragul, Vic. 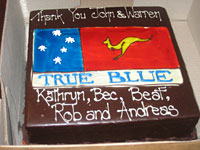 Close up of the cake! It was enjoyed by all the crew!