At last (in between interviews and media for the new album) I’m currently working out exactly how many songs I have written. It’s not simple as there are songs hidden on compilations that aren’t on the major CDs, as well as on LPs that were never CDs. There are eleven new songs to add from Butcherbird, of course. I hope you enjoy them. I reckon because I was not under pressure to write any more songs, or a new album, they’re more relaxed and very reflective. Entertainment is always the bottom line for me, so the variety is hopefully the spice that excites. I’ve been talked into a ‘Butcherbird’ t-shirt to go with the album as the drawing of the bird is my artwork. 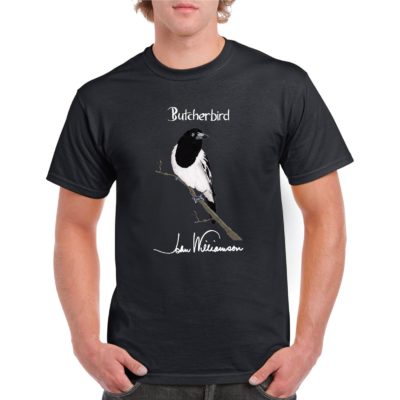 Speaking of ‘Variety’, Meg and I once again enjoyed the NSW Variety Bash. We finished it only last week and drove over many wild, hard roads. The ute has come through it fairly well, considering. It will need some work on the carby though once it gets back from Alice Springs (on the train). I had to leave the Bash at Uluru to head to the Gympie Muster, but I had a couple of glorious days in the heart of the country. The Rock and Kata Tjuta never fail to blow me away. The desert oak trees are multiplying out there, despite the dry weather, and paradise if returning. It’s no wonder the area attracts people from all over the world. There is nothing like it. They had me singing Raining on the Rock while the Bashers help up their special Bash umbrellas (not my idea). It was great to sing the song, once again, where the song originally came from. Meg had lots of offers from Bash mates to help share the driving and navigating with her for the remaining couple of days so I knew she’d be okay. This year we raised in excess of $20K. Our heartfelt thanks to the many of you who donated towards our car’s efforts. We visited many very small schools (several with less than forty students) on this Bash and it’s always so gratifying to see the wonderful teachers and families at these remote schools. John and Meg in the Painted Desert out of Coober Pedy. Our lunch stop at the Pink Roadhouse, before heading along the Oodnadatta Track. Under a beautiful desert oak on our way to Uluru. The Gympie Muster was bigger than ever and I was rapt that 15,000 people got off on my new songs. We sold many CDs so I’m looking forward to reactions from you all.

So many people have told me how much they enjoyed they my episode of Ahn’s Brush with Fame on the ABC TV last week. Complete strangers have even been stopping me in the street! I plan to put the portrait in my shed at Springbrook, so that those who come to the concerts on the June long weekend each year can share it. Ahn’s a good bloke and deserves top ratings on the ABC. I was pleased with his painting of me. I was prepared not to be, but he’s very talented, and a good comedian as well.

Tickets for Willoshed 2019 are on sale from today. Get your tickets now!

Get tickets for Saturday 8th June 2019

The rest of the year is busy with touring and the response to Butcherbird will have an influence on whether I should slow down. Maybe just not yet, folks!

See you along the road of song