John’s recent tour saw the crew brave the chilly winter weather of July but were warmly welcomed by virtually sellout audiences in Wagga, Wangaratta, Bendigo and Warrnambool. It was so cold that the entire tour crew even found themselves driving through snow between Wangarratta and Bendigo, which was quite unexpected. It gave them all a different perspective of the countryside as the snow became heavy enough to coat the ground with a blanket of white and create a Northern Hemisphere Christmas effect on the trees.

July also saw John perform True Blue at a dinner for the Steve Waugh Foundation. John and Steve are good mates and it was a great night to kick off the Ashes series. We won’t say anymore on that subject!

John and Meg were also delighted to be able to attend the 2013 Gold Harold Awards night for Life Education. Since receiving the Gold Harold Entertainment Award in 2010, John has been invited to be part of the judging panel for subsequent years. It’s always a memorable and interesting night and they were in great company including old mates Dick and Pip Smith and others at the same table.

Regrettably, after a very recent tragic family death, John and Meg have decided that they will miss the 2013 NSW Variety Bash this year. It’s a time when family support is very important and they feel the need to be around family at this sad time. They look forward, however, to the Bash in 2014 and all money raised by them for this year will be rolled over towards their entry next year. They’re planning to farewell their Bash mates at the start at Dick Smith headquarters at Chullora next Thursday morning, 22nd August, so if you’re in the area you’re sure to see a great many ‘dressed up’ cars in the area that morning. Anyone is welcome to come along. We wish the Bashers a safe drive. 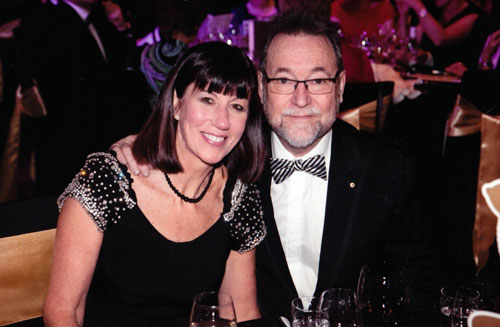 John and Meg at the 2013 Gold Harold Awards