The 40th year has been such a busy one that there’s hardly been time for road reports as such, but hopefully you’ve been catching the website updates which cover the major happenings for John.

July saw John and the crew head for South Australia and the beautiful Barossa Valley where he and Meg had a chance to lunch with Maggie Beer and her husband Colin. It was nonstop talking, some great food and a few cooking tips from Maggie as well!

The 40th birthday of ‘Old Man Emu’ was celebrated with a wonderful audience in Port Pirie on 4th June. The Renmark audience were able to celebrate as well by eating the ‘0’ part of the ’40’ of the massive cake. Then it was on to Mt Gambier (no cake left unfortunately).

At the end of June we set off for SW Queensland to finish the tour that was postponed back in March due to the floods. Appreciative audiences in Warwick, Roma, Charleville and Cunnamulla braved the cold nights to hear John perform. John’s new song ‘Look Out Cunnamulla’, which he wrote when this part of the tour had to be postponed, was a real winner. You feel as if you can hear the floodwater approaching! Another highlight of this tour was actually being on the road and driving through the magnificent country which was flourishing after the rain. We even had to stop the car for some emus on the road in between Cunnamulla and Charleville! 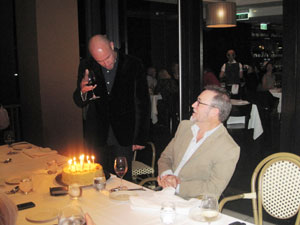 CEO of EMI Mark Poston toasts John and his amazing 40 year career at a special dinner. 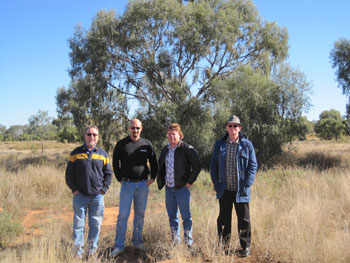 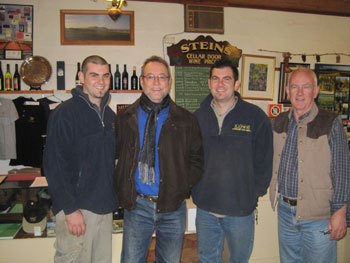 We seemed to be gluttons for punishment with cold weather in June and July, heading then to Central West NSW, visiting Lithgow, Mudgee, Orange and Dubbo. Being on the road can be pretty tiring for all the crew, with lots of driving, setting up, late nights and early starts and then the same again the next day. This tour was a bit different in that we had quite short distances between the towns. It meant that John was able to accept the invitation of young Jacob Stein to visit the Robert Stein Winery in Mudgee. Jacob is a third generation winemaker at Robert Stein Wines and not only inherited his love of wine from his grandfather Robert, but also his grandfather’s love of John’s music. We toured the winery, sampled some award-winning wines and became firm friends with the whole family. We caught up with the family again after the show . . . when John could actually relax and have a whole glass of wine! We look forward to another visit.