Recently John and Meg flew to Bali for the 10th anniversary Bali Memorial Service at the request of Prime Minister, Julia Gillard. It was a very emotional time for everyone and certainly brought back memories of John’s visit there, for the 1st Memorial Service, which gave the inspiration for his much loved song Flower On The Water.

John writes:
In 2003 I was honoured when the then Prime Minister John Howard invited me to fly with him to Bali for the first memorial service. I was to sing ‘Waltzing Matilda’ in a limestone quarry which was overlooked by a huge sculpture of a dragon. It was a heart-wrenching exercise for me and for everyone who sang and listened to the song. But it felt like we sang the spirits home to Australia . . . an opinion expressed by many.
Soon after, the official party attended another service on the beach. Balinese in canoes and Aussies on surfboards carried flowers out to sea to float on the water as the sun went down. This was quite a healing process.
After that, we strolled past the photos and wreaths beside the bomb site. It was here that I copied down four lines that were attached to a photo. I felt I might be able to write a song that could also assist in the healing process. 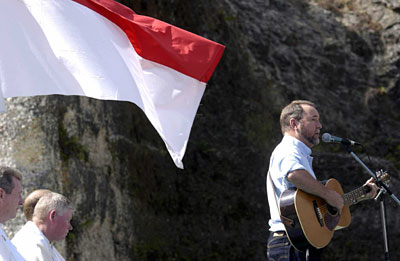 ‘To hear your voice, to see you smile
To sit and talk to you awhile
To be together the same old way
That would be our greatest wish today.’

I later discovered these lines were from a prayer book, but that’s all there was. I am even more honoured to have been invited to return to Bali to sing my own song this time, Flower On The Water, at the request of Prime Minister, Julia Gillard.

Pictured above: John performing at the Bali Memorial Service October 2003.